Astronomy is the perfect subject to get your kids excited about science. However, I’ve found that it’s not a subject many parents are eager to teach to their kids on their own. when I offered to teach Astronomy for kids at our local homeschool co-op, many parents were excited.

Over the years, I’ve taught a homeschool astronomy class for high schoolers, another one for 3rd and 4th graders, and this coming year I’ll be teaching 7th-9th graders. It has been very rewarding, and it has convinced me even more about the benefits of a child learning to appreciate and understand the heavens. 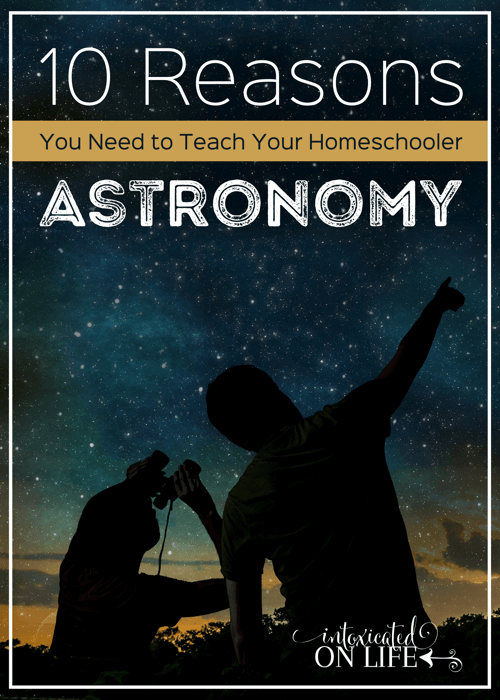 What is “Classical” Astronomy?

Classical Astronomy is the study of the motions of the heavenly bodies—the sun, moon, stars, and planets—as seen from earth.

Unlike modern astronomy, classical astronomy does not rely on telescopes: it is all about practicing the lost art of using the naked eye to observe the clockwork of the heavens. Classical Astronomy is the everyday-life astronomy ancient people did: studying the heavens for navigation and for marking times of day and seasons of the year.

Unlike astrology, which attaches superstitious meanings to the stars, Classical Astronomy seeks to understand the heavens as God designed them for us to use (Genesis 1:14-19).

Why astronomy for kids?

1. Astronomy inspires us to worship God

When God wanted to contrast Himself with powerless idols, He directed His people to look up and consider the greatness of his power in the creation of the stars:

To whom then will you compare me, that I should be like him? says the Holy One. Lift up your eyes on high and see: who created these? He who brings out their host by number, calling them all by name, by the greatness of his might, and because he is strong in power not one is missing. (Isaiah 40:25-26)

Having a background in basic astronomy can help kids to more fully comprehend classical literature that refers to stellar observations. Knowing a little about astronomy helps them understand Plato’s “Myth of Er” in The Republic, or how Odysseus used the stars to navigate his ship in The Odyssey, or the spheres of the heavens in Dante’s Paradiso.

Some of the greatest minds in classical and western literature wrote on the subject of astronomy: Homer, Virgil, Aristotle, Cicero, Ptolemy, Pliny the Elder, Euclid, Chaucer, Leonardo da Vinci, Shakespeare, and many others. This is because astronomy was part of their daily lives.

Behind every constellation is a story. Ancient cultures all looked for pictures in the sky, and many ancient people used the stars as a canvas for storytellers to pass on traditions, myths, and fables. Homeschool astronomy affords students an opportunity to study the mythologies of ancient cultures and then “pin” what they’ve learned to pictures they see from night to night in the sky.

4. Astronomy helps us understand the rhythms of our daily lives

God gave us the sun, moon, and stars to serve as “signs and for seasons, and for days and years” (Genesis 1:14). Astronomy helps us to understand the everyday realities we take for granted, like clocks, calendars, and leap years. The rising and setting of the sun establish our daily rhythms. The passing of seasons determines our yearly rhythms. 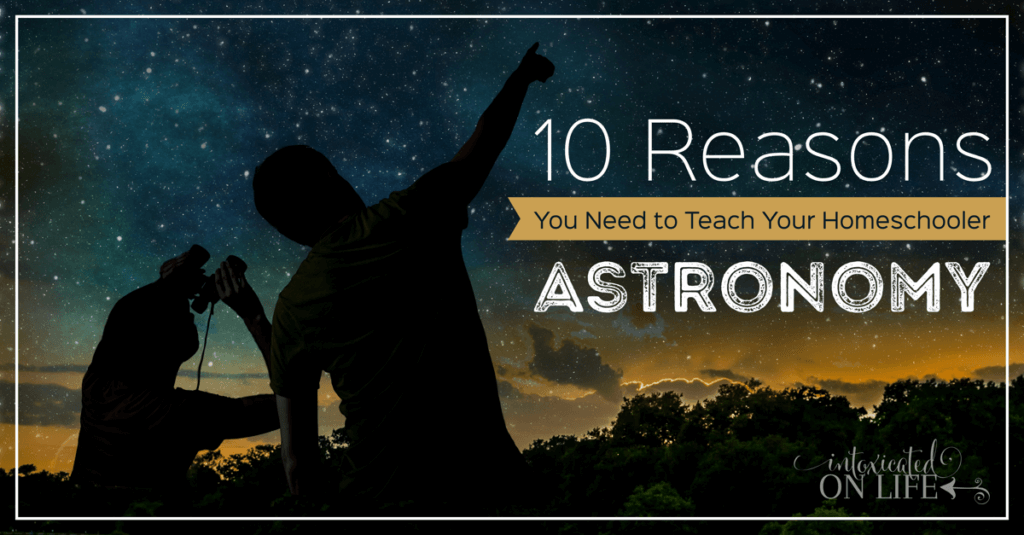 For the more ambitious students, Classical Astronomy is a natural vehicle to use math. Studying the basic motions of the heavens can help students apply math to the ancient craft of navigation and time-keeping. The history of mathematics is inextricably bound to the history of astronomical studies.

6. Homeschool Astronomy is part of a classical education

Astronomy used to be a part of the time-honored seven Liberal Arts of classical education. By studying astronomy students become a part of a long-standing tradition that has benefited western learners for hundreds of years.

7. Astronomy gets kids outside

A textbook on astronomy for kids can only take you so far. There’s no way better to really learn astronomy unless you get outside and look up, and this gives kids a great opportunity to get fresh air, go camping in the backyard, light a campfire, and enjoy the great outdoors.

8. Astronomy is fun and attracts young people to the sciences

There are very few children I’ve ever met that don’t love to talk about stars, planets, supernovas, moons, comets, and asteroids. Astronomy for kids usually ranks up there with dinosaurs for sparking interest in the sciences.

9. Astronomy, unlike other sciences, can become a hobby

It is hard to make biology, chemistry, or physics into casual hobbies. Astronomy, on the other hand, can be done nearly anywhere in the world without any technical equipment. If students want to “go pro” they can invest in star charts, good binoculars, or an amateur telescope.

10. Astronomy intersects with the Bible

Many significant passages in the Bible turn around a basic understanding of astronomy:

How to Teach Astronomy for Kids at Home

A well-balanced homeschool astronomy curriculum should involve the following elements:

Learn more about how you can give your kids a great astronomy education. Read “How to Teach Your Kids Astronomy at Home” where I outline the recourses you need.

Your Kids Can Learn Astronomy at Home!

If your child loves learning about the stars, they will love Experience Astronomy. Let us do the work and teach your kids about astronomy!

We cover so much in these full-school-year homeschool astronomy online courses. Students learn about… 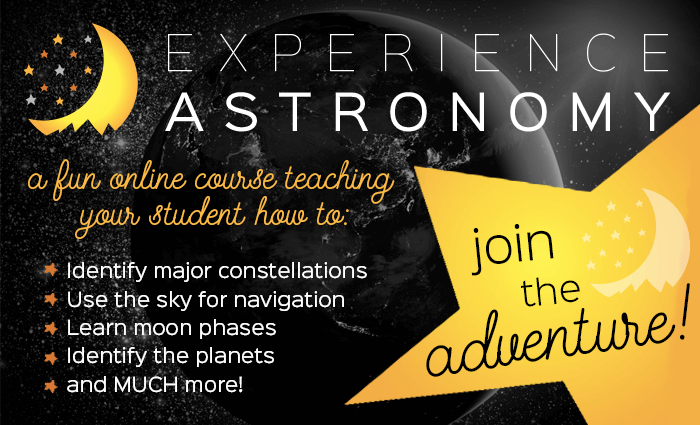