The Hunters and the Bear: The Iroquois Legend of the Big Dipper

Under the cover of darkness, a monster lurked. It feared no creature, and it considered the universe its home. It had no regard for private property, nor villages, nor towns, nor people.

On one particular chilling winter night, it emerged from the thick forest and skulked through an Iroquois village, circling the teepees, mocking the mighty warriors within, sleeping. It stole the winter rations of game and disappeared once again into the shadows of the great pines. It did not care that the village would starve. 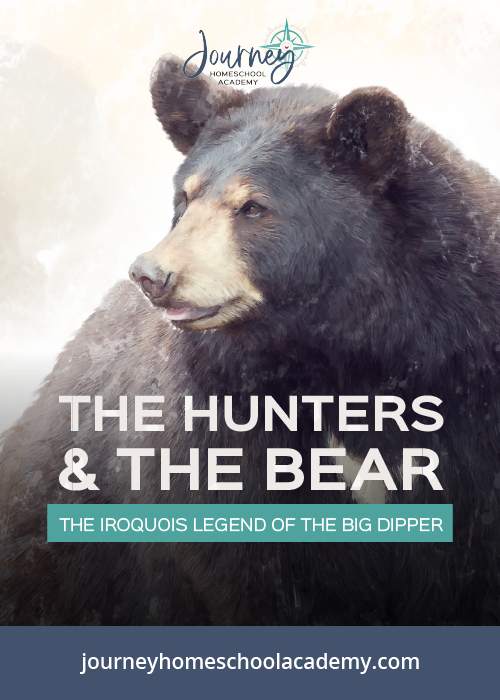 In the morning, when the rays of cheery sunlight overcame the darkness and chased away the shadows of night, each villager discovered massive pawprints outside their dwellings.

Night after night, the monster returned. The mothers forbade their children to venture into the woods, and the children dared each other to disobey. None did. The Iroquois tribe’s village had become a terrifying prison. The monster’s death was the only key. Finally, four hunters conquered their fear in order to save their village. The bravest of the brave, along with a little four-eyed dog (he sported spectacle-like rings around his eyes), set out to track and kill the monster.

The forest was eerily silent; not a single creature stirred, not a single bird chirped. A towering pine bore the bear’s claw marks. The tallest hunter reached his spear upward to try and touch the scratches. It wasn’t tall enough. The hunters exchanged anxious glances, but they gulped down the knot of fear in their throats and moved on.

Soon, they began to sense a presence nearby, as if they were being followed, watched, but whenever they looked, there were only shadows. They continued to follow the tracks day after day, but sometimes they would mysteriously disappear.

Eventually, the exhausted hunters encountered the monster. Like David going to meet Goliath, they readied their spears.

The monster was gigantic, with startlingly pale white fur. Its eyes glowed like red embers and its lips curled back to reveal deadly fangs before it bolted. Yelling war cries, the hunters and their yapping dog charged after it. They followed it up a mountain, until, when they looked down, all they saw were pinpricks of light against a dark background, like diamonds scattered across a black velvet cloth. The magical monster had led them into the uttermost depths of the sky, where the sun’s light couldn’t reach.

Now, every night, they chase the bear across the sky, until they slay it. When the bear turns upside down in the autumn, the drops of bloodstain the leaves scarlet. When spring comes again, the bear is revived and the chase resumes.

This is one version of the Iroquois legend about the asterism called the Big Dipper. It is said that the bowl is the bear, and the stars that trail behind it are the hunters.

This article was written by Jadyn, age 16, an Experience Astronomy student from Hackettstown, New Jersey.