The Faithful Servant and the Jealous Queen: The Story of the Constellation Pavo

Although the gods of Mount Olympus were great, each one of them had their own special faults. Hera, the beautiful queen of the gods, was the most jealous wife there had ever been. She hated Zeus’s other wives and children. Then, one day, when Hera was looking down on earth, she saw a suspicious-looking thundercloud where none should have been.

Hera flew into a jealous rage and rushed down to earth. There, just as she suspected, was Zeus, and with him was a dainty snow-white cow. Io, Zeus’s newest bride. Zeus had seen Hera coming and changed the lovely girl into a cow to try and protect her. Hera tried not to let her husband show how angry she was. After all, he was lord of the heavens. But she feigned surprise and asked for the little cow.

Sadly, Zeus gave it to her. What else could he do? He could not refuse the wishes of his wife without making her suspicious. Zeus stormed back up to Mount Olympus and sat brooding on his golden throne. Meanwhile, Hera took the little cow to her servant, Argus.

“Guard this cow!” she commanded. “If you fail, your life is as nothing to me.”

“My queen,” Argus answered, “all of my eyes shall never close in sleep at the same time.”

Why all of his eyes? Didn’t he only have two? But no, Argus was covered, head to toe, with one hundred eyes. This made him the most excellent watchman there had ever been. Hera tied Io to a tree, set Argus to watch, and went back to Mount Olympus to keep an eye on her husband.

Zeus watched mournfully as the beautiful cow turned her eyes up to Olympus. Finally, he could bear her distress no longer, and so he sent Hermes, god of tricksters, to set her free.

Hermes was happy to do what he loved best—fool people. He disguised himself as a shepherd and began to tell Argus a long, dull story. When Hermes was about halfway through, half of Argus’s eyes drifted shut. Hermes laughed quietly and continued on and on and on…and then the rest of Argus’s eyes closed. Hermes quickly closed all one hundred of the eyes in eternal sleep. Argus had been bored to death. Then Hermes freed Io and told her to run far away. 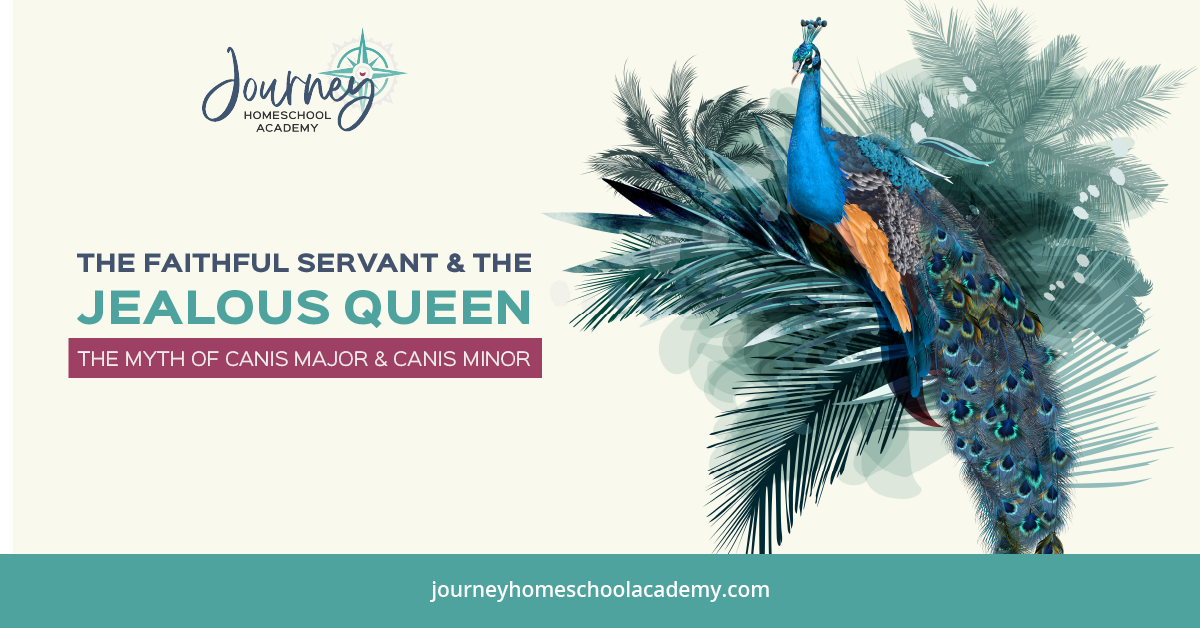 When Hera found out, she was furious. Rushing down to earth, she mourned over the loss of her faithful servant. Hera placed all of Argus’s eyes on the tail of the peacock, her favorite bird, so that Argus would never be forgotten.

So each year, when the constellation Pavo rises in the southern sky, remember the faithful servant and the jealous queen.

This article is by Sophia, age 14, an Experience Astronomy student from Meriden, Kansas.