Theseus and the Minotaur: The Story of Corona Borealis 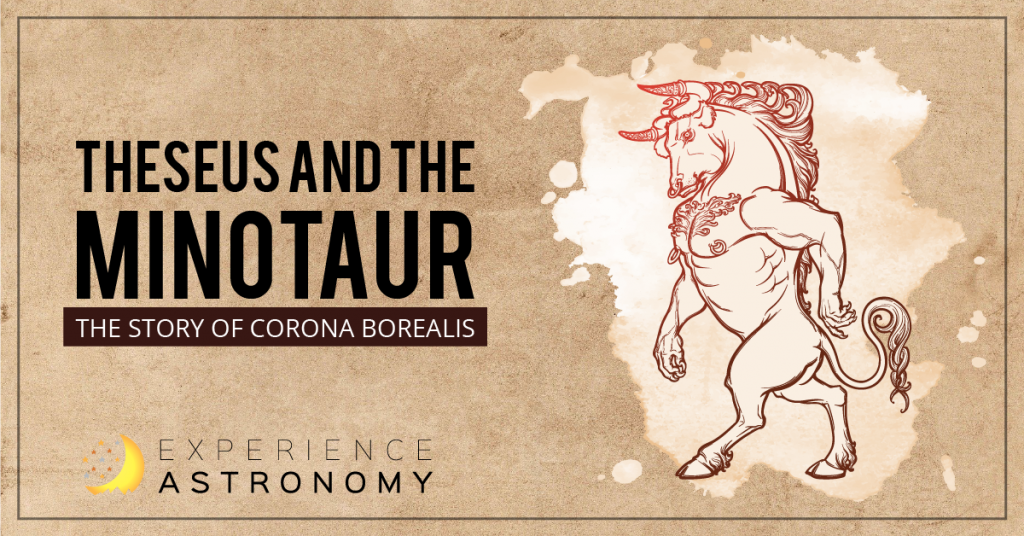 When the queen of Crete gave birth to a horrible bull-headed monster, nobody was allowed to see the baby. But soon the baby grew into a huge flesh-eating beast that became impossible to contain.

Quickly, King Minos had an enormous labyrinth designed. The elaborate maze trapped the Minotaur (as they decided to call it).

Now, King Minos began to formulate a dark plot. He demanded that his enemies in Athens send him fourteen young men and women to be devoured by the Minotaur. He threatened that if they didn’t sacrifice these few, he would destroy the whole city. His daughter Ariadne was disgusted at what he was doing.

So the unlucky fourteen arrived. They were harshly shoved into the labyrinth and were gruesomely devoured, one by one.

The following year, King Minos demanded another fourteen. And the third year again. The third year, Ariadne watched as the fourteen were brought to the labyrinth. She pitied them but there was no way to change her father’s mind. Suddenly, King Minos stopped the procession.

“You. In the rear. Come forward.” The King studied the noble-looking young man he had brought forward. “You’re different. Ah! I know: you’re Theseus, Prince of Athens! Correct?”

“Is that so? Well, I suppose the beast should have a full stomach before its death. You will face the monster alone tomorrow. The rest of you, don’t give him indigestion.” The King smiled cruelly.

Ariadne had come to love Theseus, she didn’t want him to die, so she frantically contacted the designer of the labyrinth, Daedalus. “Please, you’re the smartest man I know. You must have something that can help him!”

Daedalus sighed, “Well I have this.” He pulled out a ball of bright golden thread. “He must unwind this as he goes so he can find the way back.”

“Thank you so much, Daedalus!”

That night, Ariadne told Theseus what to do. “Please, when you escape, take me with you. This island is full of monsters, including my father.”

The next day Theseus was sent into the labyrinth. He unwound the thread as instructed. He wandered slowly until he found the Minotaur.

The Minotaur rammed his horns into the wall next to Theseus. Theseus fled until he was pressed against a wall. He extended his sword as the Minotaur charged. Theseus braced himself. But the Minotaur ran straight into his sword. It fell back and Theseus dealt the final blow.

When Theseus emerged he took Ariadne and sailed away from that wicked place. However, much to Ariadne’s despair, he abandoned her on the island of Naxos.

The god of wine, Dionysus (also called Bacchus) found her there and fell in love with her. He made her a crown with seven of the most beautiful gems mounted in it. It was placed in the heavens as Corona Borealis, Ariadne’s Crown. The seven “jewels” are still seen today. 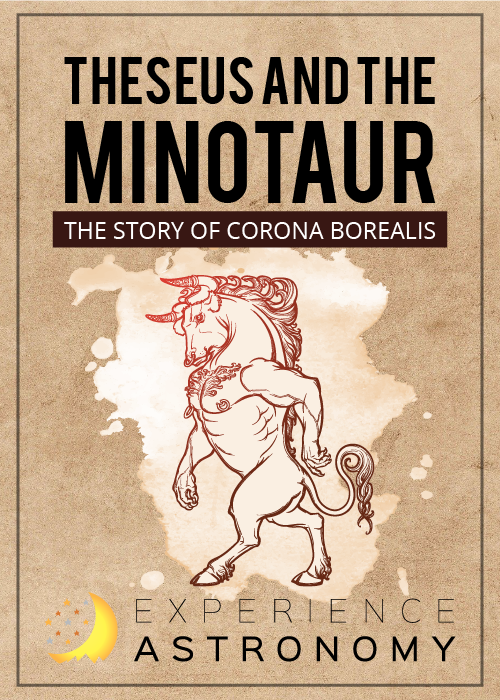 This article is by Anna, age 13, an Experience Astronomy student from Monroe, Michigan.