The Gospel in the Stars: Did God Already Name the Constellations?

Ever since I started teaching online astronomy classes for Christian students, everywhere I travel and speak on the subject of astronomy, I meet several people who ask me what I think about “God’s original names for the constellations.”

Now, to someone who isn’t familiar, that might sound like a nonsense question, so a little background is needed.

Could it be that God Himself gave us the names for the stars and constellations at the beginning of time? 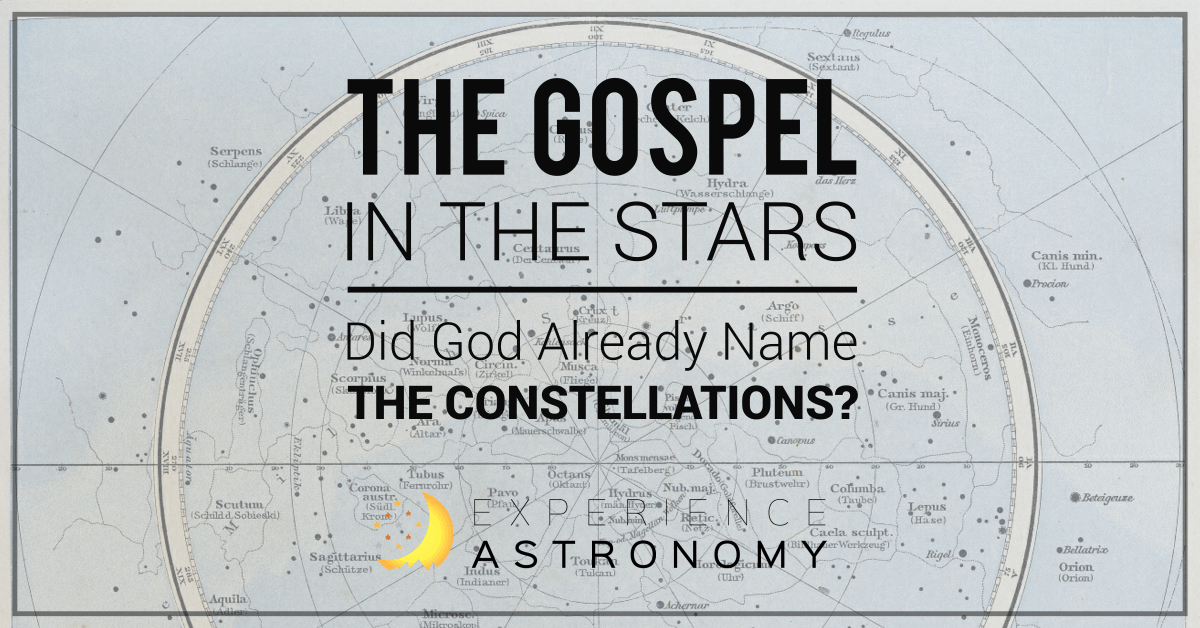 The Gospel in the Stars

The theory of “the gospel in the stars” is that God actually named the brightest stars and major constellations long, long ago, back in the earliest generations of humanity. He did this to tell an important story: stringing these constellations together, they foretell the message of the gospel.

A similar alternative theory is that God communicated his plan of redemption to the earliest people (to people like Adam or Seth) and they named the stars as a witness to this plan.

Under this theory, early human cultures understood these original pictures in the sky, but then some time after the Flood, as sinful human beings spread all over the world, they attached their own names to the stars, and thus the pagan practices of astrology began.

This theory became popular in the late 1800s. Ms. Frances Rolleston’s book, Mazzaroth, published in the 1860s, was the first to propose this theory. Joseph Seiss’s book, The Gospel in the Stars, came out about 20 years later. E.W. Bullinger’s book, The Witness of the Stars, came out the last decade of the 19th century. The theory also has a number of modern proponents, probably the most famous being Dr. D. James Kennedy.

Problems with the Theory

The primary problem with the theory is that we simply cannot go back far enough in any historical record to find the “original” names of any stars or constellations.

From where does the theory originate, then?

Seiss and Bullinger credit Frances Rolleston’s book, Mazzaroth, as containing the original research for the theory. Unfortunately, Rolleston was not a very careful scholar when citing or scrutinizing her sources. She also makes some very bold and completely unprovable assumptions in her book, making it hard to substantiate her claims.

The example of Orion—a very well known constellation—provides a good litmus test for “the gospel in the stars” theory. Let’s look at how Frances Rolleston (and others who followed her) interpreted this constellation.

Orion is a constellation easily visible in the evening in December, January, February, and March. It contains some of the brightest stars in the night sky, and for this reason, many cultures around the world have stories associated with these stars. 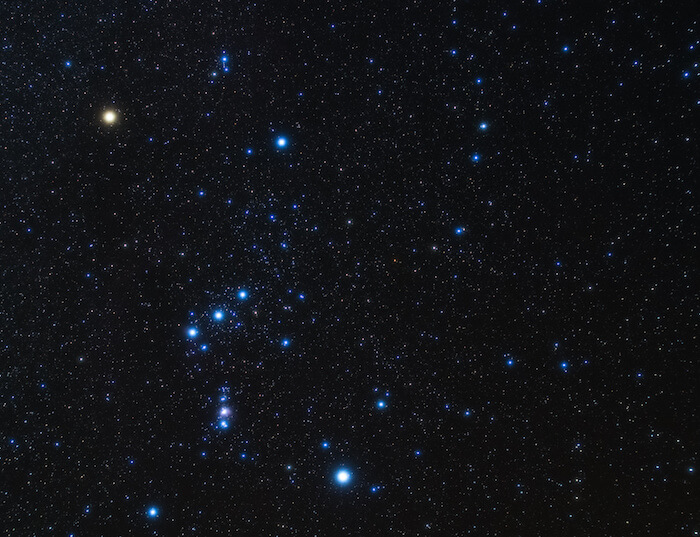 First, Rolleston says the Latin name “Orion” is based on this constellation’s Akkadian name, which means “Light of Heaven.” (This, in fact, may be accurate.) Rolleston uses this as a basis to claim Orion was originally meant to be a symbol of the promised Messiah, based on Matthew 4:16 (“the people dwelling in darkness have seen a great light…”).

Second, Rolleston claims that while most Greek stories of Orion speak of his foot resting on a rabbit, in one ancient Indian star chart, Orion’s foot is stepping on a snake. Based on this, Rolleston says this further confirms this constellation is a picture of Christ, who was prophesied in Genesis to be the one who would come to crush the head of the Satanic serpent (Genesis 3:15).

Third, Rolleston says, in certain mythologies, Orion is stung on the foot by a scorpion, bringing about his death, further confirming this constellation’s link to Genesis 3:15, where God states to the serpent, “you shall bruise his heel.”

There are several major problems with Rolleston’s evidence:

2. Rolleston cherrypicks the stories that best fit her theory. She ignores the other mythological stories of Orion’s death that don’t line up with Christ imagery. She dismisses the stories about Orion’s stepping on a rabbit without any warrant.

3. She unjustifiably mixes imagery. Likening Orion’s death by scorpion sting is hardly the same thing as being harmed by a serpent. Linking these two is a stretch at best.

4. Most importantly, her interpretation completely runs contrary to both the Bible and Jewish tradition. The constellation Orion is mentioned in the Bible at least 3 times (Job 9:9, 38:31; Amos 5:8), using the Hebrew name Kesil (כְּסִיל) meaning “Fool.” This is derived from the same word used in Proverbs nearly 50 times to describe a foolish person. This aligns nicely with the Babylonian tradition that identifies the constellation Orion with the character Nimrod (Genesis 10:8), the godless founder of Babel (v.9-10). In other words, if there was a primordial, divine name for Orion, not only do the Scriptures not mention this name, they assign a completely different name to it—the Fool—a name very unbecoming for the Messiah.

For a more thorough explanation (and refutation) of Frances Rolleston’s theories, see “A Further Examination of the Gospel in the Stars” by Dr. Danny R. Faulkner from Answers in Genesis.

Is There a Case for Christian Constellations?

The theory of “the gospel in the stars” is attractive to many Christians today. It can serve as an interesting alternative for those who want to distance themselves from the pagan mythologies associated with the stars.

I, for one, really enjoy learning what how different cultures assigned different meanings to the constellations. In my online courses, I teach kids not only the more familiar mythologies of the Greeks and Romans, but also many indigenous people groups from all over the world.

Still, some would prefer constellations have Christian meanings—and this is an idea that goes back many centuries in church. In the 8th century, the English monk, Venerable Bede, attempted to assign each of the twelve signs of the zodiac to the twelve apostles. During the Reformation in Europe, there was a movement to rename all the constellations according to biblical themes. An Italian scholar, Ambrosius Fraccus, attempted this in the mid-1500s. A German lawyer and monk, Julius Schiller, published a star atlas in the 1620s called Christian Starry Heavens, where he replaced a lot of traditional constellation named with Christian names. Another champion of this idea was the New England Puritan minister Cotton Mather.

Of course, these renamed Christian constellations were not based on any supposed “original” names but were rather Christianized symbols. Orion became Joseph, father of Jesus. The Argo became Noah’s Ark. Andromeda became the tomb of Christ. Hercules became the three Magi. Etc.

There is, of course, nothing wrong with Christians assigning new names to the constellations. Every culture on earth has done this, and there’s nothing wrong with Christian cultures assigning names to groups of stars that reflect our own cherished traditions and stories. If there was a national union of Christian astronomers who wanted to get together and rename constellation groups for the purpose of sharing our Christian heritage, I think this is a noble idea.

I doubt, however, that these new names would ever catch in the culture at large, especially because the current names of the constellations are now globally recognized. 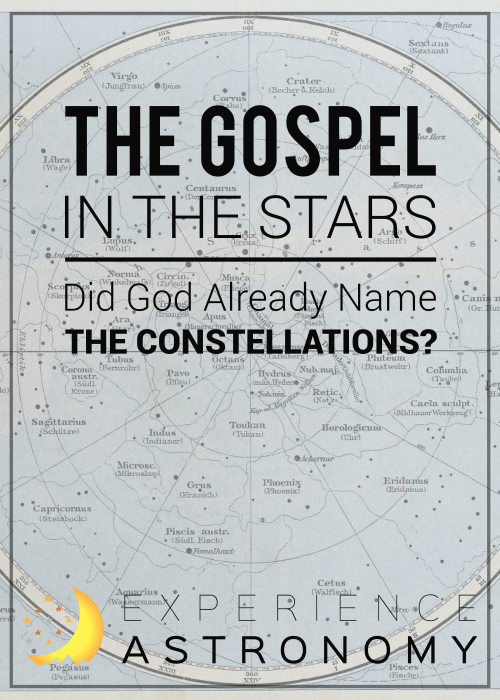 How Should Christians Do Astronomy?

Instead of merely trying to “Christianize” the sky, I would much rather Christians devote their energies to studying the heavens for the reasons God gave us the heavenly lights (Genesis 1:1,14-15):

All of these topics and a whole lot more are covered in my astronomy classes for homeschoolers. Learn more about them by clicking “Preview” at the top of this page.