Hunting with Honor: The Indian Legend of Orion and Taurus

Long ago in an Indian village, a proud twelve-year-old named Akhtar marched out of his family’s house and into the wild forest.

Akhtar was bursting with excitement because, for the first time, he was allowed to hunt by himself—without his father or older brother. “I’m going to bring home the finest catch ever!” He thought. 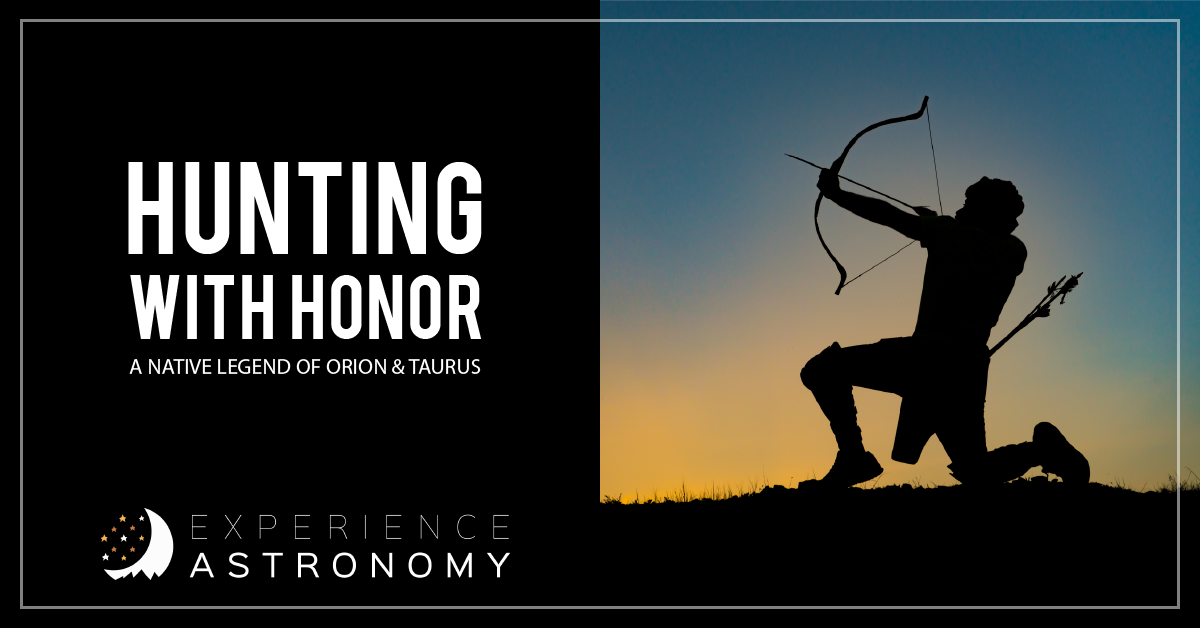 Stealthily, he darted from tree to tree until he discovered the perfect perch. Akhtar climbed the tree and settled in, reciting his father’s advice. “A good hunter is patient, watching the animal from the shadows and shifting his weight slowly like a tiger. Then he pounces.” Akhtar wanted to be as skillful as a tiger when he was hunting, so he stayed as still as possible and didn’t rustle the branches of the Bilva tree.

Akhtar waited for hours. Mosquitos whined. Sweat dripped. Monkeys screeched. Bored, Akhtar picked and dropped Bilva leaves, watching as they fluttered to the ground. Unbeknownst to him, a small Shiva Linga statue sat right beneath Akhtar’s perch. Bilva leaves are precious to Shiva, so he was pleased when some of Akhtar’s leaves fell into the lap of the Shiva Linga.

Suddenly, the most beautiful deer Akhtar had ever seen gingerly stepped into a nearby clearing. She was sleek and large, with a fine pelt. The deer sniffed at the flowers and lowered her head into the grass to eat, ears flicking slightly at the noise of the crickets in the bushes. Akhtar fingered his bow and notched an arrow. He drew back the string and aimed carefully.

Sensing danger, the deer raised her head and looked straight at Akhtar. He froze. Shiva saw the deer’s plight and gave it the momentary gift of speech. “Brave hunter,” the deer said, “I honor your skill and acknowledge my defeat. But grant me this one boon: let me see my child once more before I die. Then I will return and sacrifice myself willingly to your arrow.”

Akhtar was shocked. He had caught this deer with his own skill, and the fate of her life hung in his hands. Akhtar caught a glimpse of a memory from one of his first hunts with father. He had said, “What makes a great hunter is not what you hunt, but how you hunt. Always hunt with honor.” Mustering his courage, Akhtar let the deer return to her child, never expecting to see her again.

But a few minutes later, the deer returned and declared, “I will now fulfill my promise.” Akhtar, for the second time, was completely amazed.

Instantly, Shiva materialized from the shadows. “Both deer and hunter have shown great integrity. I would like to reward you both. What is your name, young hunter?”

“Since your name means star, I will place you both in the stars, immortal symbols of honesty and courage.”

And so Akhtar and the deer stand today in the constellations Orion and Taurus, as a reminder to always live with honor. 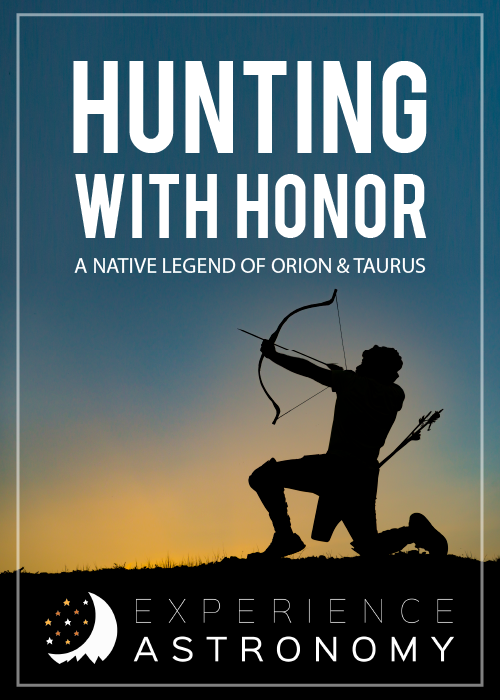 This story is by Sonja, 15, an Experience Astronomy student from San Francisco.