Astrology & Christianity: What Does the Bible Say About the Zodiac and Horoscopes?

I was in college, and it was the first time someone had ever asked me that question. My response was pretty simple: “I have no clue.” And that was true; I didn’t even know what the zodiac signs were or what they meant. When I told my friend when my birthday was, they quickly named my zodiac sign and then started talking about how my “personality makes sense.”

It’s safe to say that I was confused. 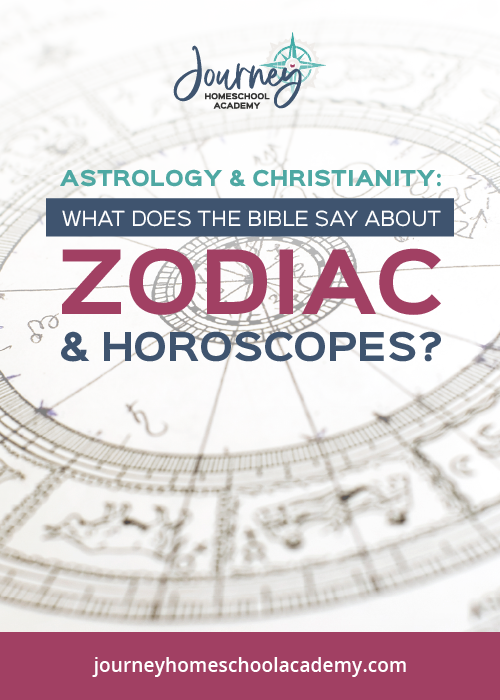 This prompted me to do some research, and I found quite a few different viewpoints. Since then, I’ve met both atheists and believers who trust in astrology and the impact it has on their lives.

The dictionary defines astrology as “the divination of the supposed influences of the stars and planets on human affairs and terrestrial events by their positions and aspects.”

The first word that often comes to mind when we think of astrology is “destiny.” What is my destiny? Who will I become, and where will life lead me? Astrology seeks to define and predict that. 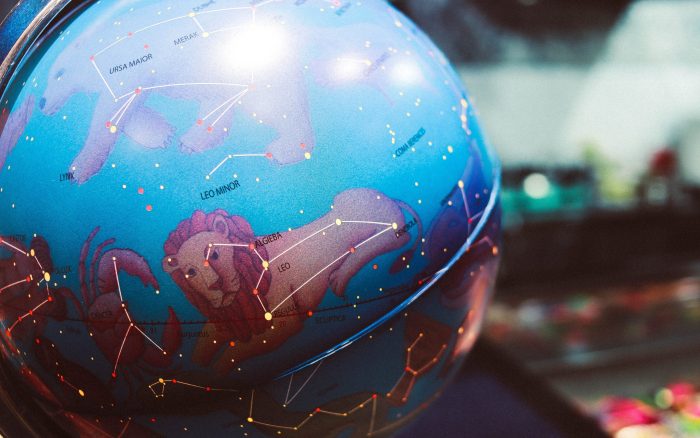 Astronomy is the practical and scientific observation of the heavens: the study of the physical universe outside of earth and all that it entails.

Astrology takes that a step further and links the universe to a human’s personality, mood, and life events.

Many scientists believe that astrology has no scientific basis due to a lack of proof. They do, however, believe in the study of astronomy because it is an observational science that produces a bounty of evidence.

The History of Astrology

In ancient times, many civilizations practiced astrology. In fact, astronomy and astrology were often practiced as one discipline. Civilizations like ancient Babylon (credited for starting the study of astrology) composed an astrology “bible” to predict a range of events: the weather, outcome of battles, and future kings. Astrologers devoted their life to observing the sky and charting patterns that would be used in the predictions. 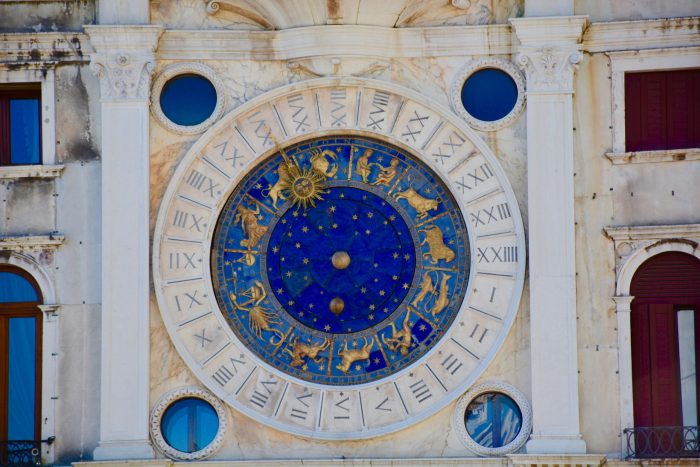 Near the end of the 5th century BC, the Babylonians created a wheel that was divided into 12 segments. Each segment was named after a constellation in the sky and attributed to a specific timeframe of the year.

Zodiac signs are assigned to the equivalent of a month’s time but start around the 21st of each month. This is because astrologists based time on the spring equinox which starts on March 21 (not January 1).

The twelve segments of the Zodiac wheel were named the following:

These signs lead people to create forecasts of a person’s future, called “horoscopes” (from the Greek term that means “time observer”). The sign under which you are born is believed to influence your future. Astrologists use a person’s birth date and look at the charting of planets, stars, and other points during that time to create a sort of “prediction” for various aspects of that person’s future (relationships, births/deaths, personality traits, etc.). They also factor in the person’s birthplace, what house they lived in, and other personal location details into the horoscope.

In general, horoscopes are known for helping people feel some control over their lives, and many accuse astrologers of inducing the placebo effect on people who use horoscopes. (For example, if you are told that you will find new happiness in the next year, wouldn’t you be on the lookout for experiences that bring you more happiness?)

There is a lot more to horoscopes and how people use and interpret them, but hopefully, this gives you enough of an overview to now address what the Bible has to say about it.

Astrology and Christianity: What Does the Bible Have to Say? 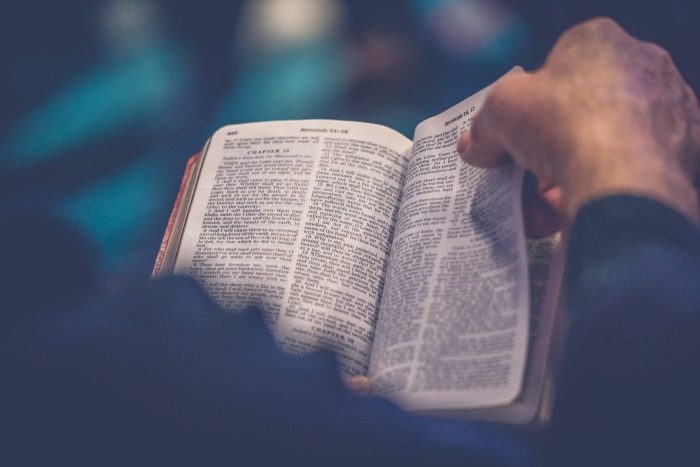 First, let it be known that the Bible quite frequently talks about astrology (primarily in the Old Testament), whether it be full-time astrologists assigned to kings or warnings from God about worshipping the stars and the moon. However, there are also many Bible verses that just simply refer to constellations, stars, and planets.

The Sun, Moon, and Stars

In the first book of Genesis, God says,

Let there be lights in the expanse of the heavens to separate the day from the night. And let them be for signs and for seasons, and for days and years (Genesis 1:14, ESV).

Job 9:9 directly mentions constellations in the sky (referring to God who created them): “who made the Bear and Orion, the Pleiades and the chambers of the south…”

In the New Testament, Jesus tells us of the final days of earth, saying,

Immediately after the tribulation of those days the sun will be darkened, and the moon will not give its light, and the stars will fall from heaven, and the powers of the heavens will be shaken” (Matthew 24:29, ESV).

Other Bible verses in Isaiah and Joel also refer to the stars and the moon in end times.

It’s pretty clear that Scripture acknowledges the marvel and beauty of the universe and all that it entails. But what about astrology itself? Remember, astronomy and astrology are two very different subjects.

Daniel Versus the Wise Men

The Old Testament is especially full of references to astrology and those who study it. A prime example comes from the book of Daniel. King Nebuchadnezzar of Babylon had a dream that greatly troubled him. He called his usual dream interpreters to attempt to make sense of his dream, but none of them could, and this angered King Nebuchadnezzar.

Just as he was about to have all of the “wise men” in his kingdom killed for their failure to interpret his dream, the prophet Daniel stepped forward and asked for an appointment with the king. Daniel was a servant under the king. When asked if he could interpret the king’s dream, Daniel said,

No wise men, enchanters, magicians, or astrologers can show to the king the mystery that the king has asked, but there is a God in heaven who reveals mysteries, and he has made known to King Nebuchadnezzar what will be in the latter days (Daniel 2:27-28).

After this proclamation, Daniel interpreted the king’s dream, and his interpretation did play out in the kingdom as Daniel said it would. Not even an astrologer could predict the dream, but Daniel, through the power of God, could.

Near the beginning of the Bible, in Deuteronomy, Moses says to the Israelites,

And beware lest you raise your eyes to heaven, and when you see the sun and the moon and the stars, all the host of heaven, you be drawn away and bow down to them and serve them, things that the Lord your God has allotted to all the peoples under the whole heaven. (Deuteronomy 4:19)

You are wearied with your many counsels; let them stand forth and save you, those who divide the heavens, who gaze at the stars, who at the new moons make known what shall come upon you. Behold, they are like stubble; the fire consumes them; they cannot deliver themselves from the power of the flame (Isaiah 47:13-14).

These scriptures make it clear that astrology was very much utilized in ancient civilizations, and it appears that each reference to astrology in Bible verses comes with negative connotations.

So, Is Astrology a Sin? 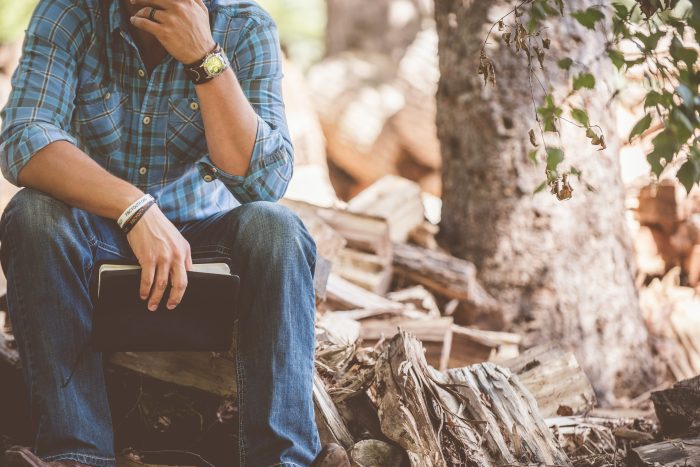 First, let’s be clear. Studying the history of astrology and how it came to be is an important part of learning about ancient civilizations. The knowledge of astrology’s history is not a sin. However, how are we to think when it comes to believing in astrology ourselves? Is it a sin to believe in the claims and predictions that astrology holds?

The basis of astrology lies in the belief that the entities of the universe (stars, moon, etc.) and their patterns and positions have an influence over a person’s life, how they act, and what happens to them. This goes directly against the biblical foundation that God is sovereign and all-knowing. No star patterns or charts can determine who we will become or what will happen in our life because God has already ordained it.

Ephesians 2:10 says, “For we are his workmanship, created in Christ Jesus for good works, which God prepared beforehand, that we should walk in them.” God has already written out the entire story of our lives, and no zodiac sign or horoscope can alter that.

In Matthew 28:18, Jesus says, “All authority in heaven and on earth has been given to me.” Note that he says all authority. Believing in the power and authority of astrology goes directly against biblical wisdom and Scripture clearly states that chasing after false gods is a sin (Matthew 24:24, 1 Corinthians 8:6, Exodus 20:3). There is no biblical evidence that God has given authority to the stars or astrologists.

Pursuing predictions about our destiny or personality takes power from God and gives it to something other than God, and that is biblically sinful. Jeremiah 1:5 says, “Before I formed you in the womb I knew you, and before you were born I consecrated you…”. A horoscope cannot change what God has already ordained before we were even created.

How to Talk to Teens About Astrology and the Bible 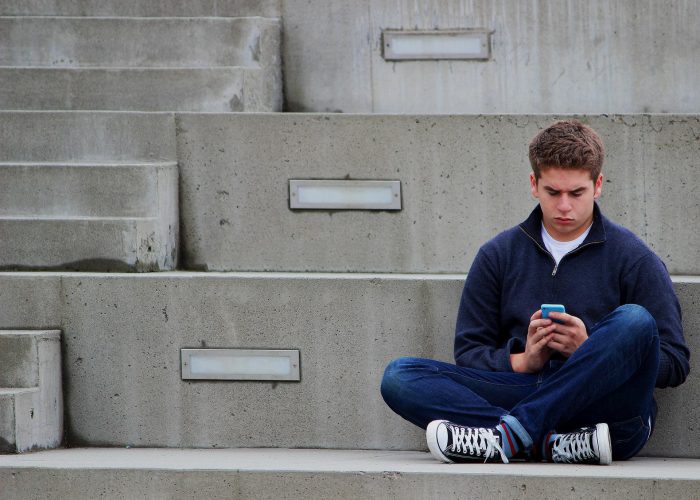 We are surrounded by a culture that actually relies quite heavily on astrology. A study done by YouGov found that 37% of Americans under the age of 30 believe in astrology (1 in 4 Americans overall). So, how can you provide your high schooler with a biblical understanding of astrology?

Turn to the Bible as the #1 source of truth.

For Christians, God’s Word is our main source of teaching, reproof, correction, and training in righteousness (2 Timothy 3:16). When your high schooler has questions about astrology, search Scripture for truth on the matter! As you study ancient history, help them understand the difference between knowledge and wisdom. There is knowledge that comes with astrology, but is there wisdom?

Encourage your high schooler to think critically about the matter. It is good that you challenge their thinking, and who knows, maybe they will challenge yours!

High school is an incredibly impressionable time of life, so the greater the impact you can make on them now, the stronger their foundation will be when they head to college and beyond. 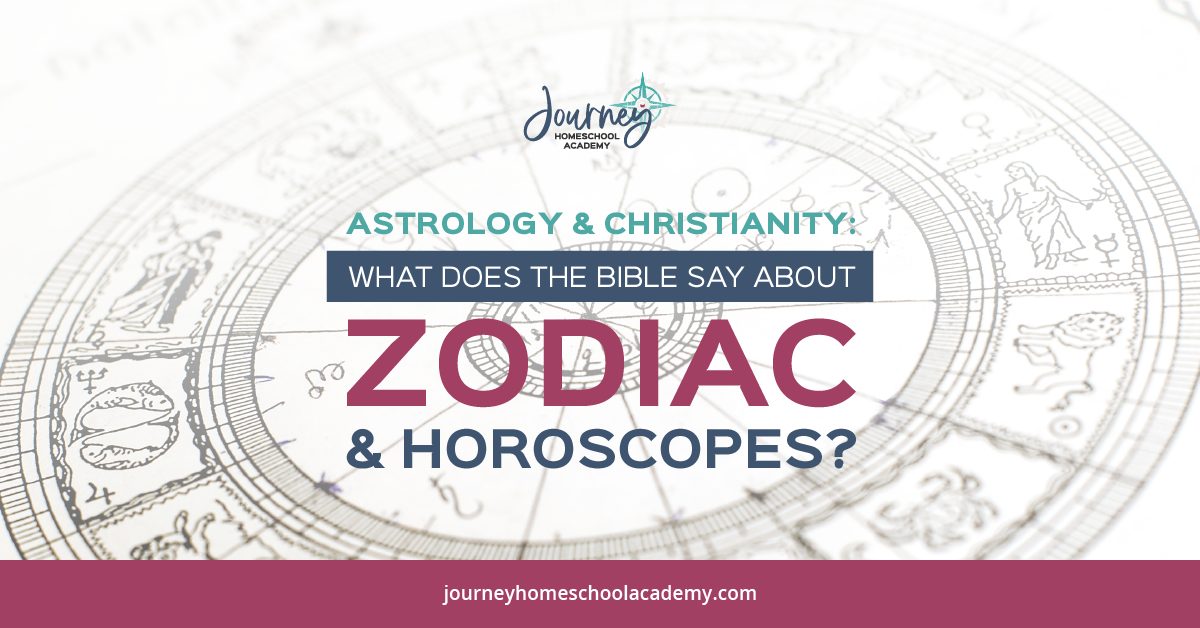 When homeschooling from a Christian perspective, it is important that your student is often able to tie their learning back to biblical truths. Of course, not all subjects will provide the best opportunity for this, but science (especially astronomy) is a great place to start!

At Journey Homeschool Academy, we offer a course called Experience Astronomy—having both a middle school and high school track.

The truth is: that stars are meant to inspire us—but not the way astrology teaches. When our kids can be inspired to true worship through astronomy, it guards them against the superstitious use of astrology.

Few laboratories in the world are as prestigious as the Cavendish Laboratory at Cambridge University. It was here the electron and neutron were discovered, the place we proved the equation E = mc², and the place where the structure of DNA was understood for the first time.

Engraved on the old oak door entrance is the Latin phrase, Magna opera Domini exquisita in omnes voluntates ejus, a translation of Psalm 111:2, “Great are the works of the Lord, studied by all who delight in them.”

This is the motto for all our science courses. Our aim is to make the study of God’s works in nature a delight so that we can better see the greatness of our God.